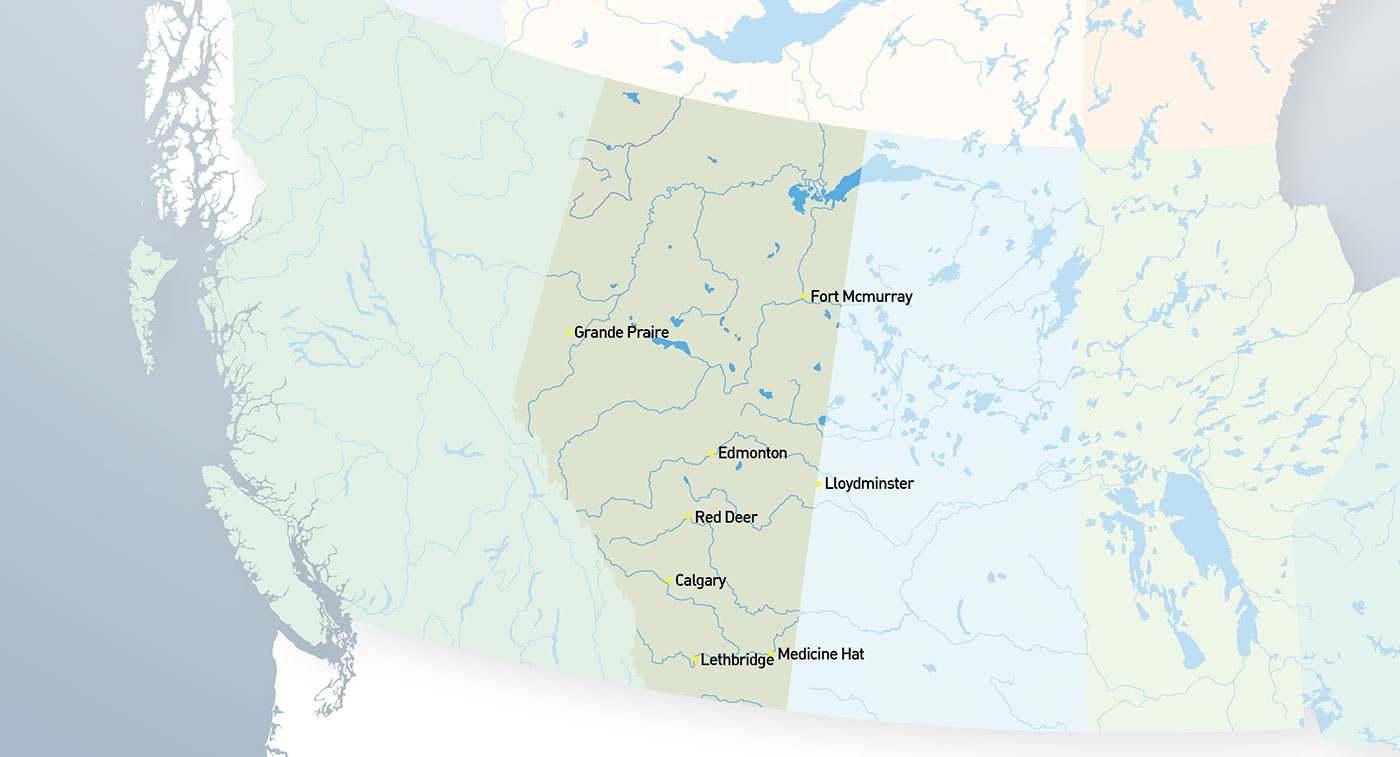 Though the first aboriginal settlements date back some 8 000 years, Alberta wasn’t explored until the mid 18th century and didn’t join confederation until September 1, 1905. Until then, parts of modern day Alberta belonged to the Northwest Territories and the District of Athabasca.

Together with Saskatchewan and Manitoba, Alberta is one of the three prairie provinces; it is  the second largest agriculture producer and the largest cattle producer in Canada. Most known for its oil reserves which are the second largest in the world and 70% of Canada’s coal reserves. Thousands of tourist also come to Alberta each year to take advantage of the unique mix of  the prairies and high mountains.

For the longest period of time Edmonton and all of Alberta have kept a reputation of having no rats, though that is no longer so certain Edmonton still remains the home of North Americas largest mall which until 2004 was the largest in the world spanning 48 city blocks. Sitting just outside the large city is Elk Island National Park which is home to a large population of free roaming bison, moose and elk.

The saying "there was something new around every corner" is a rather relative term when it comes to a bunch of straight roads, that however didn't stop us from stopping every few meters. The landscape was ever changing as we traveled from high mountains, through wheat farms, over everlasting roads, past beautiful wind farms and right into Calgary; seeing in one day what some people don't see in the whole year.

A combination of history, wildlife, and breathtaking landscapes equals a place called Waterton Lakes National Park. We were simply looking for bears, at first that's what brought us all the way from Calgary down to the Canadian - USA border and one could say that we are crazy to travel that far, but the trip left us with so much more than what we wanted. I guess there is no better combination of people, history and nature than what you find here.

People always talk about how flat and boring the Canadian prairie is, but it all depends on how you looks at it. While traveling from Waterton Lakes National Park up to Calgary our cameras did not stop shooting. There was always something even the long straight roads proved to be interesting as an oncoming storm engulfed the surrounding farms leaving only rays of light and the high peaks of the Rockies shining in the distance.

Also known as Cowtown to some due to it's still very western image, Calgary is home to the famous Calagary Stampede which bills itself as “The Greatest Outdoor Show on Earth" and brings in over a millions visitors each year. Calgary is also Canada's sunniest major cities and for us it still remains largely unexplored as we prepare for our next visit to Calgary to see its many festivals and events.

If a Canadian wants to see dinosaurs they visit Drumheller and the area that is rightfully called "the Heart of Canadian Badlands". Unlike the farms and forests that surround the rest of the province this area is home to the world's largest dinosaur, a vast desert of hoodoos, valleys and canyons that surround the Red Deer River. In the future we hope to further explore this region in the different seasons and even aerial perspectives.

The transformation from the colorful farms and buzzing agricultural aircrafts in the summer to the quiet, frozen and barren landscapes of the winter can be almost unrecognizable. While this is a cold transformation that occurs throughout Canada other than  in the tropical rainforest's of British Columbia, winter remains just as photogenic as the rest of the year even when the skies remain blue and the land remains white.

If there is a place in Canada so full to the brim with wildlife, than the forests on the eastern side of the Rockies have to be it. Wild Horses, Moose, Deer, Owls and Big Horn Sheep are only a handful of the animals that we saw and they still make up only a small portion of the footprints that we could see. Working our way through this maze of dirt roads and fighting off invasions of mosquito's was definitely worth it when we finally found the wildlife that we were looking for.

Fourth time will hopefully be the charm, we first visited this lake just outside Jasper National Park in 2012 looking for the unique and beautiful ice bubbles. Short on time we never got far enough to access the lake so we drove by  again during the summer looking for access points, having found a few we went back in 2014, but nigh time along with the bitter cold quickly forced us out. After returning so many times with no luck we are now determined to come back again and get the shot that we have been waiting years for.

The planned search for Grizzly Bears in the Canadian Rockies was going to take us deep into the mountains on a maze of forests roads following the rivers and streams. That being only a plan, the reality however consisted of us driving right up to the point  where the road literally disappeared. Following the floods of 2013 that washed away and buried great parts of Alberta this region was inaccessible so we had to turn around. Following a different road right past farms decorated with thousands of hats we slowly made our way to our final destination.

Cold to some but warm to others -37° Celsius remains our record for the coldest day, but we couldn't help and wonder why after enduring almost three months of such cold were these rivers around Castle Mountain in Banff National Park still running. Well, we will let you decide that, but one thing is certain; after spending the morning under layers of clothing in -37° going into -24° feels like summertime and you start to wear shirts and jeans.

Traveling down the Icefields Parkway between Jasper and Banff National Park truly offers some amazing scenery. Especially when you reach the beautiful scenery of Lake Louis and the pristine summer colors of Peyto Lake this regions remains a unique wilderness and if you don't get scared off by an angry Sage Grouse that tries to scare you away at the gate then you are free to enjoy the view.

The Athabasca Glacier in Jasper National Park is one of the six principal glaciers of the Columbia Icefields, it is also currently receding at a rate of about five meters per year and will probably disappear completely in the next 100 years. We ourselves have seen it change dramatically with every visit, though with a variety of activities to do on the glacier and in the surrounding area this still remains a very photogenic and unique landscape, despite its fast disappearance.

The Rockies are also a division line as well as a birthplace for many rivers, to the west they flow into the Pacific Ocean and to the east they flow as far as the Arctic Ocean more than 3000km away. We were fortunate enough to visit the many waterfalls of Jasper National Park both in the summer time when they roar through the deep canyons as well as in the wintertime when they freeze almost completely through, a change that sometimes leaves them unrecognizable.

East to west, west to east it doesn't really matter, traveling either way you had to pass through the magnificent Rockies and most likely Jasper National Park. Stretching from Northern British Columbia down to the Canadian - USA border and beyond, this vast mountain range is home to some of the most well known scenery in the country. In the winter much of this landscape is full of easily visible wildlife as well as frozen rivers and lakes that shine under nights that are brighter than ever; while in the summer climbers, hikers and tourists flood this popular destination.

Maligne Valley in Jasper National Park consists of a variety of landscapes and environmental wonders, like one of the worlds most extensive underground systems of  Medicine Lake. While other areas of the Maligne Valley still remain mostly unexplored for us, like the Maligne Canyon  and the wilderness of Maligne lake, which we hope to explore in the near future.

Heavily traveled during the summer the Icefields Parkway which connects Jasper and Banff is far less popular during the winter when temperatures fall far bellow  zero. The fast flowing rivers freeze and large populations of bears during the summer  give way to the clear blue skies, long star filled nights and the snow filled adventures  of the little Rockies that are overshadowed by the monumental snow covered peaks in the winter.

After driving more than 8000 km and even being stuck behind an avalanche 2016 was without a doubt the warmest year in north western Canada. As we climbed out of the prairie and back into the Rockies the temperatures climbed to +8 in mid February creating a spring far away from spring.

With a provincial border right through the center of town Lloydminster is in fact not two towns that share the same name, but just one town divided in half. One part of Lloydminster falls on the Alberta side and the other  falls on the Saskatchewan side making it very unique.

To deal with the differences between the two provinces Saskatchewan made the exemption of giving its side an exemption in sales tax so they don't lose business to Alberta.

The taste of winter is always in the air in the Canadian Prairie, even in July. Morning mist and fog sweeps across the plains throughout the year creating an inspirational sight especially when you have the ability to look at it from above.