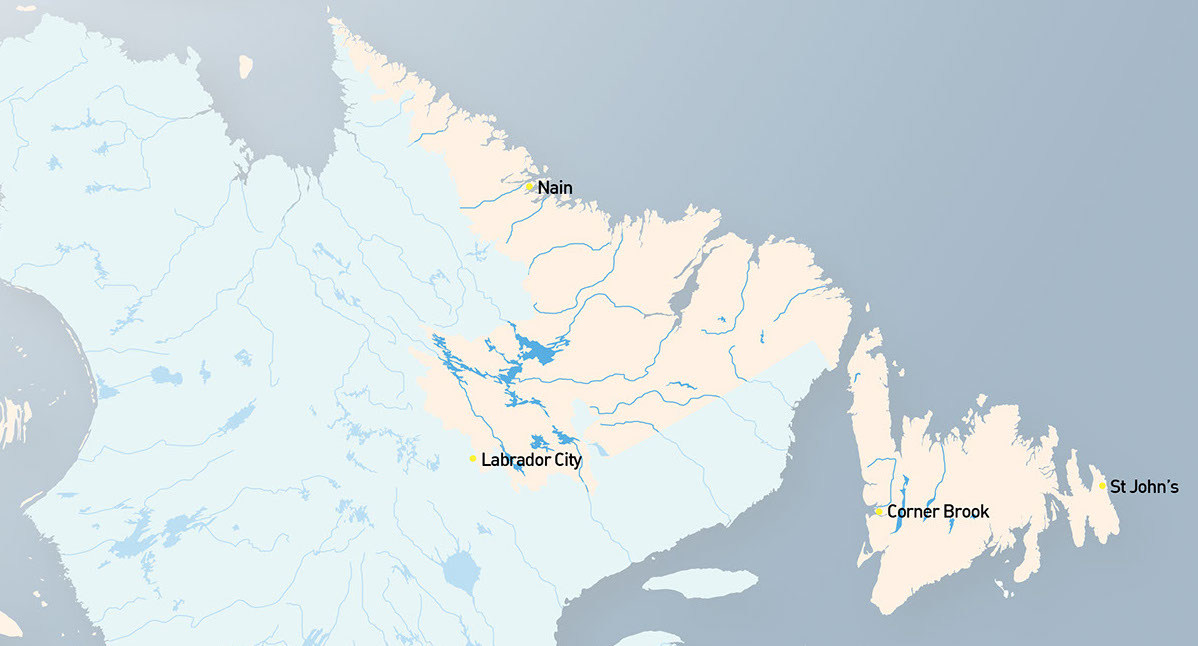 One of the largest islands in the world and the most easterly province in Canada; Newfoundland and Labrador is home to one of the oldest settlements in North America, St John's, which became Canada's first incorporated city in 1785. Though Newfoundland and Labrador was first explored by John Cabot in 1497 it didn't join Canada until March 31, 1949.

The island of Newfoundland has no snakes, skunks or groundhogs so come Groundhog Day Newfoundlanders watch out for black bears instead. Moose are also not native to the island; over a hundred years ago six were introduced to the island paradise and have since then colonized the island with over 100 000 individuals.

Nothing gets the heart going quite like an airplane buzzing right above the rooftop of our car. Looks like the fire crews were out testing their wings prior to what might be a busy fire season in Newfoundland. Though that is hard to imagine considering it's June and it's looking like spring.

One of the largest city centers after St John's, Corner Brook acts like a service station for western Newfoundland. In the winter it receives large accumulations of snow both in town and in the mountains making it a prime skiing destination for the island. A stop over for us on this trip, but a definite must see for our next expedition we hope to visit again soon.

It all started with a conversation "there are no bears in Newfoundland, how would they get there." Newfoundland might have more moose than people, but would have thought bears? Well, lets just say we saw a bear before we saw a moose and by the end of the week we still only saw one moose and one bear...

Our first meeting with poison ivy during this trip happened in the small fishing village of Trinity. The scenery however was definitely worth the itchy drive to St John's as we walked and drove around town photographing the many heritage sites.

First fox of our journey could not have been cuter. Following a great night and company in Sandringham we decided to go up to Salvage before heading to Bonavista. On our way there we ran into a family of foxes playing on the road, three black and two red we just fell in love with all of them. Turns out we were not the only ones; this young fellow liked us even more as he refused to go back to mom.

Also called the Venice of the North due to its many canals and islands, New-Wes-Valley rightfully earns that name. It may not have the buildings or the tourists, but this quiet fishing town and its beautiful skyline are a magical place to visit.

Another mad dash to catch the ferry more than 1000 km away meant that we didn't really have much time to stop. Good thing we had those conveniently planned pea breaks to capture images like this one; who would have ever thought that Newfoundland is so big.

Home to the largest mix of blues and greens; Gros Morne National Park not only kept us busy with the cameras, but also with our legs. Looking at a map and even the km count the hike to green gardens didn't look to bad; however almost six hours later once we returned to the car again it was safe to say that we were beat. The scenery was magical, but next time we will take a boat ride up some fjords just to save our legs.

The gateway to Newfoundland Channel-Port aux Basques is the first land you touch after getting off from the overnight ferry to the island; it along with the nearby Cape Ray also happen to look as if they fell right out of a Hitchcock movie. With the abandoned houses, blue ocean, and almost surreal scenery; all that it's really missing are the flocks of birds.

A total accident and surprise for us as we tried to find icebergs in Newfoundland. La Scie was one of those places that we were not planning on visiting, but by the end it was the nicest place we have been to. Towering cliffs, icebergs right in the harbor and people so friendly that you don't want to leave this still remains one of our best decisions. If you ever go to Newfoundland you can't leave without visiting La Scie and staying at Fair Haven Retreat.

The chase down iceberg alley brought us to many different communities as well as to many different icebergs, but none were quite as big as those in Twillingate. Heavy winds took most of the bergs far out to sea, they even attempted to take our drone which we manged to land in the last minute. Regardless the green and the blue with a mix of color from this fishing village we were sad to leave.

The largest city in Newfoundland and Labrador and the second largest in Atlantic Canada, St John's is considered the oldest English established city in North America. The city itself is home to many historic landmarks as well as colorful streets and buildings like jellybean row and Old Battery; a short drive from town also lies Canada's most eastern point Cape Spear.

First discovered by John Cabot in 1497 who called it "O Buon Vista" meaning Oh, Happy Sight the land he talked about was Cape Bonavista. Now home to a lighthouse and Cabot's statue the area is still dominated by high cliffs and rugged seas. The town itself has a very long history in fishing, it also happens to be the home of the first school in Newfoundland.