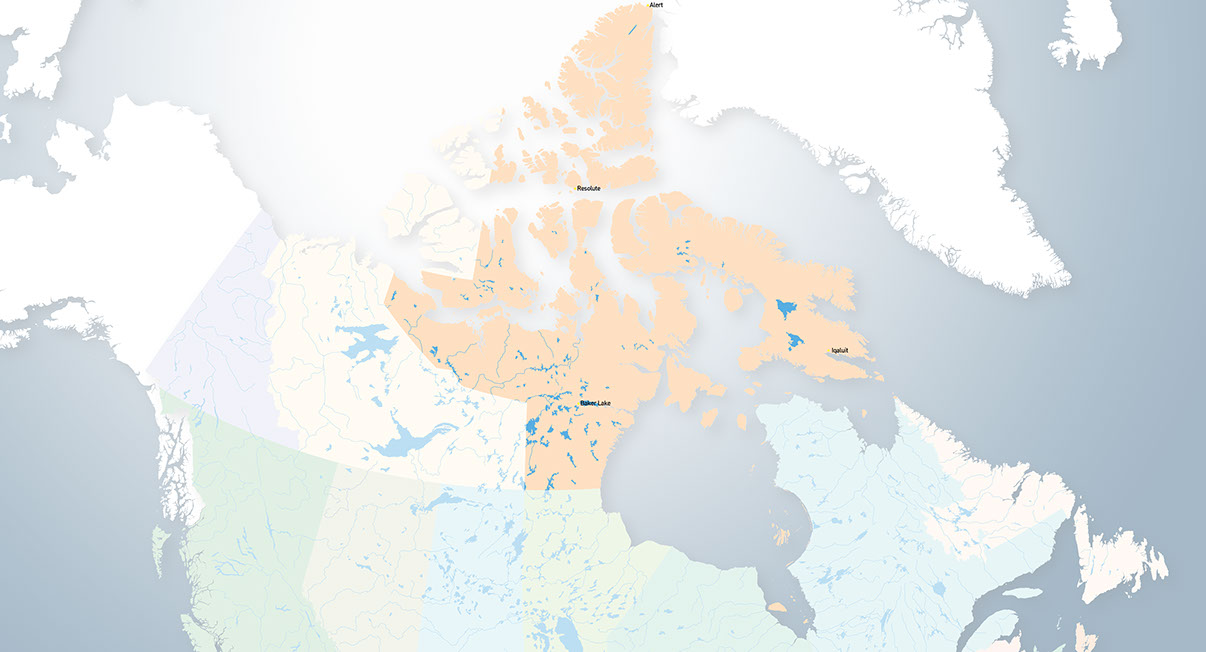 For those wishing to experience the  Northwest Passage, Cambridge Bay is the largest stop over. Many passengers and research vessels traversing the passage board their boats here before beginning their journey east. The city is itself is home to the new year-round Canadian High Arctic Research Station.

Maud, Roald Amundsen's ship, which was built  for his second expedition to the Arctic, sailed the Northwest Passage in six years between 1918 and 1924. She was sold to the Hudson's Bay Company in 1995 and sank in 1930. She laid submerged in Cambridge Bay  until 2016 when she was raised.

Unlike down south a sunrise in the high Canadian Arctic is something that only happens several times throughout the entire year. Due to the 24 hours of daylight in the summer and 24 hours of darkness in the winter every sunrise and sunset is magical. Here closer to the west coast, unlike on the eastern coast of Nunavut, it is tremendously flat. Often you can be at water level only a kilometer from shore and never know that it's there, but as you head north slowly the mountains start to rise.

King William Island is a largely flat desolate island which never rises too far above the ocean, however the island plays a crucial role in the ill-fated Franklin expedition and search.  In 1859 Francis Leopold McClintock  discovered a note left on King William Island with details about the expedition's fate. Searches continued through much of the 19th century, but didn't find anything until 2014 when a Canadian search team located HMS Erebus west of O'Reilly Island. It wasn't until 2016  that the HMS Terror wreck was also located south of King William Island in pristine condition. During our One Ocean Expedition at Victory Point we were only a few kilometers away from the wreck of the Terror.

Situated the southern tip of Prince of Wales Island, Coningham Bay is a haven for Polar Bears. Due to a combination of tides and shallow sand bars the bay is a great rubbing area for Beluga Whales. This makes for great hunting and scavenging for Polar Bears who take advantage of the easy meals. Not often do bears get to feed in the summer, but here they do and it isn't uncommon to see 40+ fat bears in one bay making this the ideal remote location for wildlife viewing.

Beechey Island is home to many significant events in the history of Arctic exploration. In 1845, the British explorer Sir John Franklin, aboard HMS Erebus and Terror, chose the protected harbor of Beechey Island to overwinter. It was unknown what happened to Franklin  until search vessels looking for him discovered the bay along with three graves, though this discovery only made the tale of the two ships more complicated. Between 1852 and 1853  Northumberland House was erected by the crew of HMS North Star. It was built in case the missing members of Franklin's expedition should return to Beechey Island, even though they were missing for 7 years.

Bordering Sirmilik National Park, low point is one of the closest ways across Navy Board Inlet when trying to get from Baffin to Bylot Island. This used to make it one of the major migration routes for the Baffin Island caribou prior to their crash in population.

It was a cold and windy night as we headed down the coast of Baffin Island. Staring at the waves break over the bow  we tried to pick out the auroras dancing over head without getting blown right from the ship. Gusting at over 70km an  hour Davis Strait is well known amongst sailors for its fierce tides.

The largest island in Canada, Baffin Island is home to a wide variety of plants, animals, mountain ranges and lakes. Baffin Island contains Canada's oldest ice, dating back some 20,000 years, though this ice cap measuring roughly 6,000 km²  has started to melt at a rate of more than one meter per year.

Of all the places to enjoy the Aurora Borealis there is no better place than in the middle of the Arctic Ocean. This might sound like a very cold idea, but it isn't when you are aboard the Akademik Ioffe (One Ocean Navigator) enjoying a beer and sitting in the hot tub. Pretty sure the early explorers had it wrong, this would have made for a much more pleasant journey.

The boundary of Nunavut and its waters goes as far south as Manitoba, Ontario and Quebec, making it possible for someone to take a boat ride out from Churchill, Manitoba and actually be in Nunavut without knowing it. Regardless of where you are though, during the summer months thousands of Belugas congregate in the mouths and estuaries of the arctic rivers. To rid their bodies of old skin and parasites the fresh water actually softens their skin and then the round pebbles loosen it. Built to tolerate both salt and fresh water some whales have even been known to follow the rivers into inland lakes.

Following one of the prime shipping lanes used by whalers in the 1650s the area around the east coast of Baffin used to be one of the prime habitats for Northern Right Whales, also known as the right whale to catch because they floated when shot, the now known Bowhead Whale almost went extinct. Today Isabella Bay near Clyde River protects some of the remaining whales and it isn't uncommon to see a few dozen in the one bay alone.

Like many other Islands in Nunavut, Monumental Island has dozens of icebergs grounded on its shores. The island itself is a popular spot for walrus and Polar bears that are most likely attracted by the nesting birds. Named by Arctic explorer Charles Francis Hall as a tribute to the memory of Sir John Franklin, Monumental Island lies not far from Lady Franklin Island.

Situated near Cumberland Sound the area around Pangnirtung was heavily used by whalers hunting Bowhead Whales. While the whales were heavily hunted everywhere else they remained undiscovered in Cumberland Sound. In 1921 the Hudson's Bay Company established a trading post in town which was mostly used for hunting belugas. Today residents fish for turbot and create high-quality traditional arts in sculpture, as well numerous designs in printmaking and weaving.

The largest of four hamlets above the 72nd parallel, Pond Inlet was named in 1818 by explorer John Ross for John Pond, an English astronomer. Today the community still practices traditional hunting techniques as well as guides tourists to the Ice edge from May to June. Due to its isolation and the fact that the ocean here is ice free only for about three months in the year, fresh foods such as fruits, vegetables and milk are flown from Montreal to Pond Inlet several times a week, a distance of about 2,500 km.

With the lowest population in any capital city in Canada, Iqaluit is still the largest community, and the only city in Nunavut. In 1999, Iqaluit became the capital of Nunavut after the division of the Northwest Territories. Prior to these events Iqaluit was not well know outside of the Canadian Arctic or Canada. Population and economic growth is highly limited due to the city's isolation and heavy dependence on expensively imported supplies as the city, like the rest of Nunavut, has no road, rail, or even ship connections for parts of the year to the rest of Canada.

Separating the northernmost part of mainland North America from the nearby Somerset Island, Bellot Strait is a very narrow hard-to-navigate passage. Captain William Kennedy and Joseph René Bellot reached the strait by dogsled from Batty Bay in 1852. The entrance to the strait is very hard to find, hence why many explorers gave up on passing it and even missed it all together; it was finally crossed in 1937 when the Aklavik crossed from west to east.

One of the richest ecosystems in the Arctic happens right where the cold Arctic Ocean meets the sea ice. Narwhal, Bowhead, Seals, and Polar bears all frequent the area trying to make the most of it before the sea ice disappears. Usually freezing over from December until the midnight sun melts it in June, people from all over the world come to visit this unique environment around Bylot Island. Camping in -10 temperatures in June and enjoying the sun that never sets there is nowhere else like it.

Roughly 80km deep, Gibbs Fjord joins a web of deep fjord systems surrounded by towering cliffs and glaciers. It extends deep into Baffin Island and is one of the prime areas for base jumpers and skiers in the winter when it freezes. Cliffs reaching 1368 meters drop straight down into the ocean dwarfing anyone who dares to enter.

Dundas Harbour is an abandoned outpost on Devon Island which was established in August 1924 as part of a government RCMP presence intended to curb foreign whaling and other activity. Though it switched hands a few times since then the buildings were finally shut down in 1951 due to ice difficulty and stayed abandoned ever since. Just to the west of the harbor lies Croker Bay which is one of the last few remaining glaciers on Devon that calve icebergs right into the Arctic ocean.

Bordering the Arctic Circle, Sunshine Fjord has far less mountains than the neighboring fjords of Ayuittuq National Park. At least it is now far enough down Baffin that the Auroras can be clearly visible dancing across from the Southern sky. It also looks as if it was far enough to the tropics that it requires a nice warm swim in the 2 degree water.

Heading up Somerset Island towards Prince Leopold Island the scenery quickly starts to change from rolling hills into steep cliffs as Lancaster Sound opens up in front of you. The British explorer John Ross in 1818 ended his quest for the Northwest Passage after seeing what he believed were mountains blocking the end of Lancaster Sound. Though in 1819 William Edward Parry got through the inexistent mountains to what he named Prince Leopold Island and then sailing further as far as Melville Island.