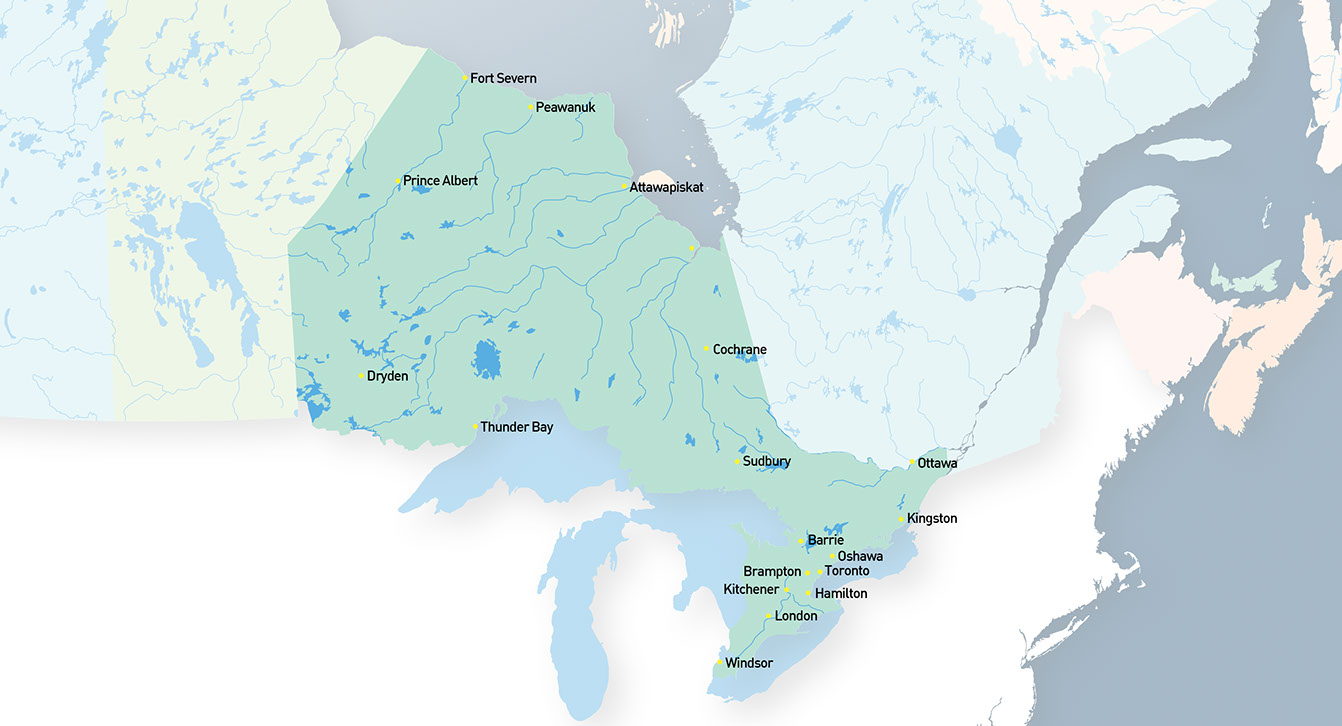 “Loyal she began and loyal she remains” is the motto that Ontario has been holding ever since it became one of the first four provinces that formed Canada on July 1, 1867.

Today Ontario is Canada’s second largest province and is home to Canada’s largest population as well as the most valuable team in the NHL, The Toronto Maple Leafs. Ontario contains one-third of the worlds water and the worlds longest freshwater beach, as well as what until 2010 was the worlds highest structure, the CN Tower in Toronto.

The only main road by which anyone can enter Ontario is the highway 1. Looking at it via satellite near the border of Manitoba it just looks like a line through a blue landscape with some land in between, it's hard to believe how a road can cross so many lakes in general.

The land of the moose and a thousand lakes, if you ask anyone or tell anyone that you drove through Ontario they will tell you to watch out for moose. In our quest to find some we only ran into this waterfall. The shot we were looking for might have been that of dozens of lakes, but instead we came out with something equally as interesting.

Much of the historic industries like forestry and manufacturing have slowly declined from Thunder Bay, however it still remains a vital shipping port for grain as it sits right at the end of the Great Lakes. Thunder Bay is also the city where Terry Fox had to stop his run as he battled cancer, his goal of running from coast to coast cut short after 5,373 km and 143 days.

During our mad dash to Ottawa we had to cut our visit along the Great Lakes short. Pretty unfortunate as there is so much to see from Thunder Bay to Sault Ste. Marie and beyond; looks like we will be returning again soon to visit places like Sleeping Giant Provincial Park and more.

Prior to the war of 1812 Sault Ste. Marie   used to be one city, today half of the city is in the United States while the other is in Canada. Divided only by St. Mary's River the international bridge now joins the two cities. A series of busy locks enable ships to travel between the two lakes without having to pass the 20 feet high rapids.

In some countries we have our own cities and in some we have our own streets. When ever we see things like that we cannot help, but stop and get a picture of these iconic places for us, such being Rue Martin St.

not only is Kingston nicknamed the "Limestone City" because of the many heritage buildings constructed using local limestone it also happens to be the first capital of the Province of Canada created on February 10, 1841. This beautiful city's motto "where history and innovation thrive" totally reflects the general clean image of the city with it's many parks and scenic waterfront.

A North American suburb might look like a bunch of similar looking or identical house to the naked eye, but it takes an aerial perspective to truly capture the size of these areas. Mostly found in each major city this very distinctive housing can sometimes stretch for miles with little variation. Looking more like a game or a set of model  streets this is nothing, but real.

With a large industrial complex, Hamilton also happens to be the nesting town for thousands of cormorants and gulls. Taking advantage of the lack of predators in the uninhabited areas, not only are the birds something that you can hear at the other end of town, but also something that you can smell and feel as you get closer.

St. Catharines carries the official nickname "The Garden City" due to its 1,000 acres of parks, gardens and trails, it also happens to be home to the  Lakeside Park Carousel. Carved between 1898 and 1905 in Brooklyn, New York the carousel is only one of  350 antique hand carved carousels still operating in North America. Anyone can ride for just 5 cents since the price is not allowed to changed since the 20s.

The capital city of Canada Ottawa borders Gatineau, Quebec; the two of which form the core of the Ottawa–Gatineau metropolitan. The city is thought to have one of the highest standards of living in the nation with very little unemployment. Once a very industrial city Ottawa's appearance was  drastically changed by the 1950 Greber Plan which was meant to create a capital that symbolize the whole country.

Thousand Islands archipelago consists of roughly 1,864 islands that straddle the Canadian and United States border, though most of these are in Ontario just under one third are in the state of New York. To qualify as an island in the St Lawrence the land must be more than one square foot above water and support at least tow living trees. A few of these islands are privately owned, serving as either one house residences or full communities.

Not only the provincial capitol, but also the most populous city in Canada and fourth in North America; Toronto is also widely recognized as one of the most multicultural and cosmopolitan cities in the world. It is a prominent center for music, sport, theatre, motion picture and television production as well as the home base for many Canadian companies. The CN Tower which is the tallest free-standing structure in the Western Hemisphere dominates the skyline and can be soon from just about anywhere.

Straddling the international border between Canada and the United States, Niagara Falls is the collective name for three waterfalls. Horseshoe Falls, which falls largely on the Canadian side is the most powerful waterfall in North America and it combined with the other three have the highest flow rate of any waterfall in the world. The city itself welcomes millions of tourists a year who come to see the natural wonder as well as spend time in the cities many high rise hotels, casinos, golf courses and more.